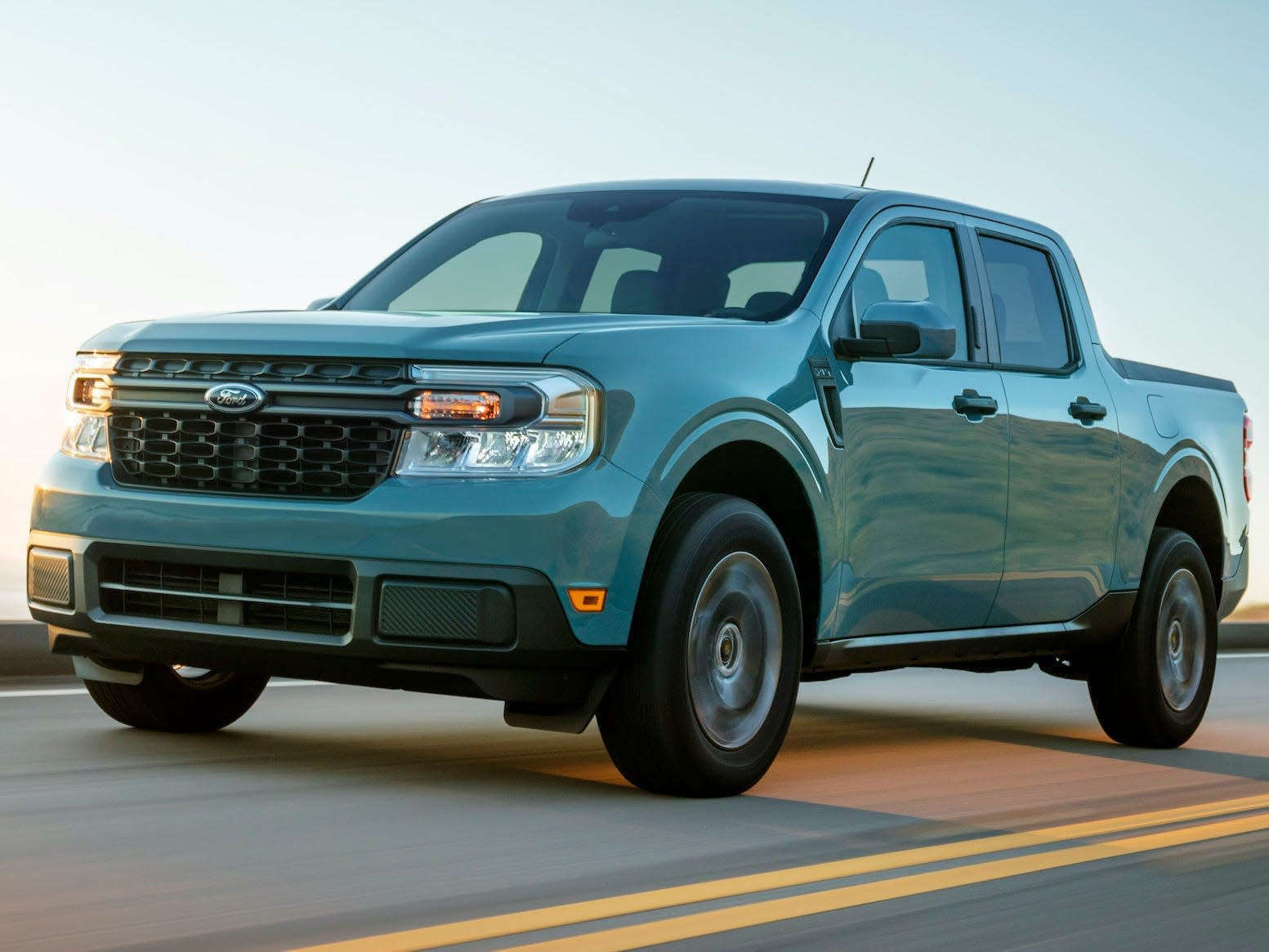 Ford’s new $20,000 pickup could be a game changer, but only if it can convince people to ditch their crossovers and bigger trucks

Nearly every new pickup truck you see rumbling down the road today is a pricey behemoth that’s roughly the size of a small house. But it wasn’t always that way.

Ford is looking to resurrect the small-but-mighty pickups of decades past with the new 2022 Maverick revealed Tuesday. The truck delivers on compact size and an enticing starting price of around $20,000, but Ford is entering uncharted territory – and it’s not a certainty that customers will bite.

“We still need to see if there’s a real market for these kinds of lifestyle pickups,” Augusto Amorim, a senior manager of sales forecasting at the research firm LMC Automotive, told Insider. “It’s so much smaller than what we are used to when you think about a truck. It’ll be interesting to see how customers react.”

While the Maverick isn’t exactly pint-sized, it’s significantly smaller than mid-size pickups like Ford’s Ranger or the more popular Toyota Tacoma. Ford’s thinking here is to target nontraditional, more urban truck buyers with a vehicle that’s easier to maneuver and park than other pickups, but still offers similar functionality. But it’s a gamble, Amorim says, given that it’s an untested segment.

LMC is forecasting that Ford will sell between 40,000 and 50,000 Mavericks per year. That’s peanuts compared with the number of F-Series trucks it moves annually – usually 800,000 or more – but it’s about in line with sales of the Honda Ridgeline, another car-based pickup. It’s about double what LMC is expecting from the Hyundai Santa Cruz, which goes on sale this summer as the Maverick’s only true rival in the compact truck space.

Still, the Maverick could be a home run given its bargain-bin pricing and selling points distinct from other pickups, says Michelle Krebs, an executive analyst at Cox Automotive.

“Trucks have never been more popular, but what has happened is they’ve gotten bigger and bigger and more expensive,” Krebs said in an interview. “So there’s a huge white space for people who don’t want a truck that big and certainly don’t want to pay that kind of money, but they want a truck.”

The average price paid for a new car has ballooned to above $40,000, and pickup trucks, the second most popular vehicle type after crossovers, are partially to blame for that trend. The average transaction price for an F-150 is in the $50,000 range, while Rangers typically sell for roughly $40,000, Krebs said. A top-trim Maverick Lariat can be had for $25,000 plus destination fees, while a fully-loaded model comes in around $35,000.

Importantly, though, the Maverick isn’t just a shrunk-down F-150 or Ranger, and offers more than just a small size, Krebs says. It’s its own thing, with features uniquely catered to the recreational buyer and the only standard hybrid engine in any US pickup. That powertrain, which Ford says delivers 40 mpg, could be key for attracting a younger, more environmentally conscious, or less affluent crowd that has traditionally been put off by gas-guzzling trucks.

The Maverick’s $19,995 entry price – which makes it Ford’s new entry-level offering and the cheapest pickup truck on the market – was very much a deliberate move, Ford vice president Jim Baumbick told Insider. The automaker hopes that a combination of a low sticker price and high versatility will steal customers away from a host of different segments, including sedans, a market it abandoned in 2018.

Analysts who spoke to Insider agree that the trailblazing truck could snag some unexpected customers. Plus, it wouldn’t be the first time that a novel type of vehicle took off at around this price point. Not too long ago, subcompact crossovers were virtually nonexistent in the US, but now tiny, cheap SUVs like the Kia Seltos, Hyundai Kona, Honda HR-V, and Subaru Crosstrek are huge sellers for their respective companies.

“Those vehicles really helped bring a more price-sensitive consumer to the crossover segment, so we can clearly see that happening to trucks,” says LMC’s Amorim.

People ended up loving the increased ride height, visibility, and cargo space that small crossovers provided over sedans, says Ivan Drury, senior manager of insights at Edmunds. A Maverick-sized pickup, with arguably even more functionality than a subcompact crossover, could be a logical next step for those people, he said.

The Maverick could very well spark a deluge of new compact pickups from General Motors and others, especially if it does well.

But competitors will likely find it hard to enter the market with a product as compelling and attractively priced as Ford’s pickup, Drury said. One key advantage Ford has as it rolls out the Maverick is its vast network of commercial and government customers, something Hyundai can’t leverage with the Santa Cruz, Cox Automotive’s Krebs said.

The little pickup’s debut is just the latest sign that Ford and its new CEO Jim Farley are turning things around after years of lackluster profits.

In the last year, Ford launched the electric Mustang Mach-E crossover, Bronco Sport, and a new generation of the F-150. Last month, it showed off its debut battery-powered pickup, the F-150 Lightning, which hits streets next year. And after years in decline, Ford’s share price has shot up more than 70% in 2021 – even outpacing Elon Musk’s Tesla.

The Maverick and those other well-received vehicles may be just what Ford needs to win back some of the customers it’s lost over the years, Drury said.

“By having these products that are perfectly suited for the market, it’s really changing peoples’ opinions of the brand,” he said. “I think for anyone who used to have a Ford and strayed from it, this might bring them back into the fold.”